The Key Out of Time by Andre Norton 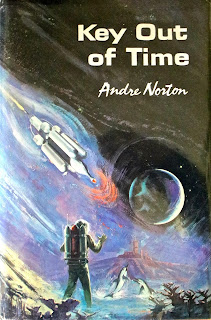 The Key Out of Time by Andre Norton, The World Publishing Company, 1963, Cover by Giac Faragasso

In this novel, time agents Ross Murdoch and Gordon Ashe have lead an expedition to one of the planets located from the tapes they recovered from the alien "Baldies" at the end of Galactic Derelict. Hawaika named for the Polynesian paradise is a perfect planet, a world of shallow seas and archipelagoes, a mild climate and lot of resources. In keeping with the project policy of trying to match the ancestral cultures of the colonists with the new planet their team consists Samoan and Hawaiian volunteers including Karara Trehern and her dolphins Tino-rau and Taua, who as is typical in Norton's work have the ability for low level communicate with Karara.  There is not mention that the team has been subjected to the Redax machine which was used to awaken ancestral memories in the Apache colonists in the earlier novel The Defiant Agents, possibly because that group was never heard from again. As the novel opens Ross is disgruntled with the assignment, he is having a hard time adjusting to the introduction of Karara to the hitherto masculine teams of agents.

"“Before being summarily recruited into the Project, Ross had been a loner—living on the ragged edges of the law, an indigestible bit for the civilization which had become too ordered and "adjusted" to absorb his kind. But in the Project he had discovered others like himself—men born out of time, too ruthless, too individualistic for their own age, but able to operate with ease in the dangerous paths of the Time Agents.” (13).

Also his relationship with Ashe is troubled, Ashe is withdrawn growing more distant and bad-tempered, consumed by his guilt for the Project leaders betrayal of the Apache colonists he helped recruit including his friend Travis Fox. 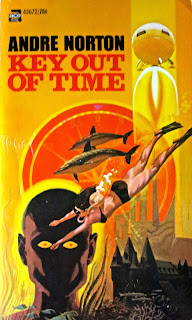 While the Polynesians are described as colonists we again have the Cold War focus of the earlier books. Hawaika has been surveyed to look for any Baldy ruins or technology that may exist which could give the Western alliance an advantage over the Soviets. This survey was unsuccessful so Ross and Ashe are moving on the the second phase of the plan to establish a time portal through which they can view the past civilizations of the planet and possibly gather some information of use to them in the present day. There is no plan for them actually travel back in time. But of course a storm blows in and Ross, Ashe, Karara and the dolphins are all propelled into the planet's past, a world of coastal wreckers, Viking like traders and a powerful and mysterious race called the Foanna.

One thing I should mention is that Norton's admiration for Native Americans does not seem to extend to Polynesians despite the fact that Kana Karr the mercenary hero of her novel Star Guard (1955) is of Australian-Malay-Hawaiian ancestry.

At least the following passage seems less that flattering. “all of the settlers were good swimmers. An organized hunt ought to shake the Polynesians out of their present do-it-tomorrow attitude. As long as they had had definite work before them—the unloading of the ship, the building of the village, all the labors incidental to the establishing of this base—they had shown energy and enthusiasm. It was only during the last couple of weeks that the languor which appeared part of the atmosphere here had crept up on them, so that now they were content to live at a slower and lazier pace. Ross remembered Ashe's comparison made the evening before, likening Hawaika to a legendary Terran island where the inhabitants lived a drugged existence, feeding upon the seeds of a native plant. Hawaika was fast becoming a lotus land for Terrans.”(16) maybe it's the water.

I found The Key Out of Time a reasonable sequel/conclusion to the other books but perhaps less engaging. In the 1990's three additional Time Trader novels were produced by Norton in collaboration? with other writers, I will not be including them in this survey. The original novel had the appeal of creating a new fictional world, Galactic Derelict totally shifted the focus to outer space exploration, Defiant Agents benefited from the whole dynamic of the relationship between the Project and the Apache team. The Key Out of Time was a more standard adventure novel albeit with many of the typical Norton tropes which I will discuss below.

But what was really driven home to me in this novel was how rarely in any Norton novel can the protagonists return home. They may find another potential home or family somewhere in time or space but unlike the protagonists of other novels of the period they do not have an adventure and then return to some stable environment. To avoid dealing with the complications of extended family or controlling bureaucracies, Norton selects her characters from the ranks of orphans, loners, criminals, refugees, oppressed minorities,  the survivors of some disaster that destroyed their plant or culture, or independent traders etc.. Robert D. Lofland conducted a long interview with Norton in her home for his MA Thesis,  Andre Norton, A Contemporary Author of Books for Young People, 1960. In speaking about Norton he notes “ she feels the hero must be an orphan in order that his parents cannot interfere with his actions." Almost all the protagonists Norton selects seem to be orphans of one kind or another. 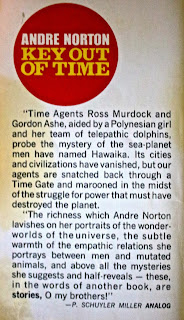 The Norton tropes in this novel include some level of human animal communication, competing races on the same planet, a minority cultural group and in the Foanna you have the very typical Norton element of a powerful matriarchal ruling group. SF author Arthur C Clarke created three rules for SF writing the third rule states that "Any sufficiently advanced technology is indistinguishable from magic." (see link below ) and certainly the powers assigned to the Foanna seem more magic than science with wands, gates, and teleportation. I think this is typical of the arc of Norton's writing as over time she morphs from a writer of SF to a writer of Fantasy and both elements are blended together in many of her novels. 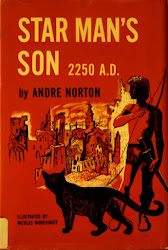 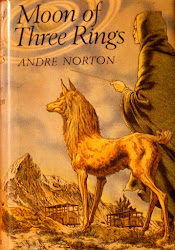 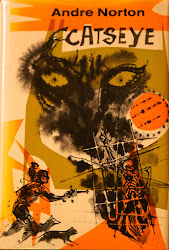